A HISTORY FORGED BY ENCOUNTERS

Some encounters are the catalyst for great stories. In 1964, brothers Albert JAUBERT and Roger JAUBERT together with Jean GAYET form an ingenious trio with a passion for a job well done and create the JAUBERT-GAYET automotive bodywork company. This is a team whose unshakeable bonds had been forged during their previous work experience at a caravan manufacturer. Although they have the expertise when it comes to automotive repairs, quite a challenge lies ahead: designing and manufacturing a retail trailer to transport and sell fresh produce at open-air markets.

Before the days of modern refrigeration, eutectic boxes were placed in the freezer prior to market day and their subsequent gradual defrosting created the cooling effect that enabled to preserve fresh produce, just like in an ice-box!

After long nights of hard work, their first retail vehicle, which they named “Lapanissières” in homage to the small town where the company was located, sees the light of day in 1965.

YOUTH ON A ROLL!

The team rapidly expands to meet demand from users. In 1968, due to the exponential growth of open-air markets in the Lyon and Saint-Etienne area, the company specialises exclusively in the production of retail trailers and vehicles.

From its very beginnings, the raison d’être of the company is to provide bespoke customer service and quality products which have been studied and refined down to the minutest detail.

In the 1970s, to meet an ever-growing demand, the three founders purchase an old weaving factory at Panissières, which will become the main production premises for their retail vehicles.

Refrigeration technology has begun to evolve. Eutectic boxes are replaced by large cooling plates that are recharged on the eve of market day.

In 1985, the maintenance and repairs department is created to further broaden the range of services made available to customers.

A second JAUBERT-GAYET generation joins the company ranks towards the end of the 1970s, keen to participate in this family venture: Joël and Jean-Marc JAUBERT, as well as Bernard GAYET come to lend a helping hand to their fathers.

“AS BEAUTIFUL AS A TRUCK!”

It is in 1997 that LAPANISSIERES becomes EUROMAG, the long-term vision being to expand sales of increasingly cutting-edge new and used retail trucks, in particular on foreign markets.

In the 2000’s, considerable investment is made in Research a& Development to bolster growth while providing forever more innovation, features and enhanced looks.

In 2007, the objective of producing and selling 300 vehicles per year is surpassed.

2013 is a decisive turning point for EUROMAG which moves to a much larger production site enabling to substantially increase the number of employees while ascertaining the best possible working conditions.

In 2019, EUROMAG turns resolutely towards the future with a talented, versatile, tenacious and highly motivated team under the impetus of a new generation that grew up within the family business: Lucie JAUBERT and Samuel JAUBERT.

EUROMAG currently has the full range of expertise required to produce any type of retail vehicle while being one of the most long-standing experts in the field.

This success story stems from a work ethic that is passed on from generation to generation, revolving around three axes that lie at the very heart of the company strategy: the power of innovation, the reliability of a high-quality product, and the guarantee of close customer relations.

EUROMAG’s unwavering ambition is to provide solutions which combine a high level of precision and personalisation: retail vehicle and haute couture rolled into one!

“We are proud to have seen our customers grow and expand over several generations. Our aim is to enhance their daily work while paying close attention to their needs and even anticipating them”.

Why don’t you also join the EUROMAG community!

THE PEOPLE BEHIND THE EUROMAG SPIRIT 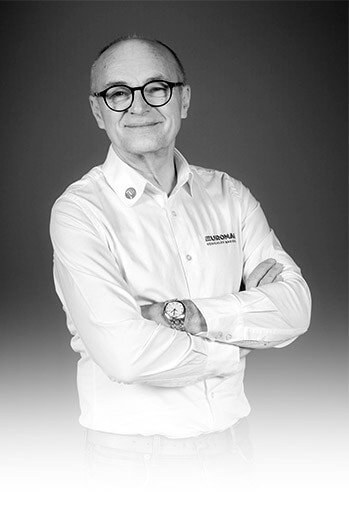 For Joël Jaubert, Euromag is a lifetime project which he has devoted himself to wholeheartedly day after day. Joël joined his father’s company in 1979 and worked relentlessly for decades with his associates Bernard and Jean-Marc to make EUROMAG the company it is today, buoyed by family values.

What lies behind the success? Handling events one after the other, thinking about them at length… a real father figure. No precipitation, grounded decisions and controlled growth. “You are much steadier on the helm when you know where you are going!”

Joël Jaubert is passionate about his customers’ field of work: producers and craftspeople who transform their products and instil life to open-air markets. It is with the aim of facilitating their daily lives as much as possible that he keeps a watchful eye on all the evolutions and trends in the profession to then focus on the most astute technological innovations.

Joël conducts his orchestra of employees while holding frequent meetings with customers, production teams and sales managers. The ease with which he fosters human relations, his tenacity and devotion both in good and difficult times are undoubtedly his key strengths.

He is now proud to be able to share the vision of EUROMAG with the new generation while soaking up their fresh, frank and enterprising outlook.

Joël has always been a very hard worker, to the extent that he is only just beginning to learn to ski but is also very keen on hiking and gardening. Could this be his secret for sowing the seeds of success? 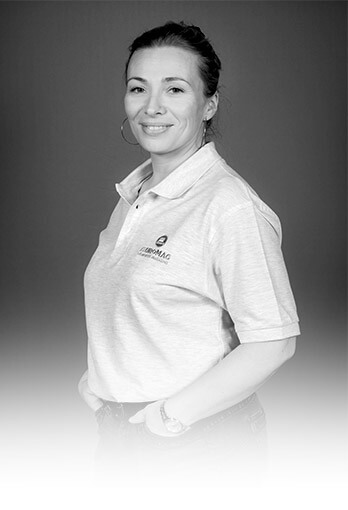 Lucie joined the family business 11 years ago as Assistant Manager, having graduated in Communication and Marketing. Lucie rapidly found her bearings within the business and progressively took charge of internal and external company communication.

Lucie has an impressively broad range of expertise which she draws on to provide her insight into the EUROMAG strategy, as well as the design of advertising or vehicle decoration.

Ever since her childhood, Lucie has been at the very heart of the EUROMAG venture which was the subject of frequent and passionate family discussions. Her father Joël spent all his days at the factory and would sometimes even still be there at the weekends cleaning the vehicles and this dynamic family impetus has always been something that appealed to her.

Social networks, advertising, promotion at exhibitions, press relations… Lucie is now responsible for upholding the company and family values that lie at the very heart of Euromag.

Lucie also deploys the marketing strategy, oversees product plans, and sets out the short and long-term objectives. She has inherited a fighting spirit and is unwaveringly committed to ascertaining that the company maintains a modern outlook while preparing for the future!

Outside work, Lucie is a devoted mother and passionate about history and literature, being a particularly avid reader of crime thrillers. 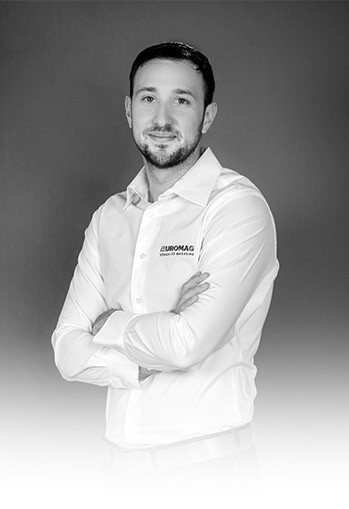 During his childhood, Samuel was repeatedly told about the value of a job well done. As from the age of 16, he started working in the repairs department before studying and specialising in automotive bodywork.

Samuel occupied the post of Quality and Certification Manager at EUROMAG from late 2016 to July 2018, before taking over the after-sales department from his father, and finally deciding to proudly play his part in the family tradition by joining General Management alongside Lucie.

The objective of this solid all-rounder who has such a passion for his work is to keep the flame burning strong. Samuel’s serene approach and solid background enable him to focus on developing the food retail truck market while paying close heed to new markets.

Even though there is no such thing as a typical day for Samuel, you can be sure of one thing: a solid work ethic is what drives him! Being very keen on travelling and motorsports, and motorbikes in particular, Samuel aims to show the extent to which the EUROMAG spirit thrives within him.

EUROMAG: SERVING CUSTOMER NEEDS FROM ONE GENERATION TO THE NEXT